3 EPs – AND in Leipzig & Kopenhagen AND

AND (Anouck Genthon, violin, Ed Williams, guitar) is pleased to announce the release of three new EPs taken from various performances. The first we’re releasing features recordings of our 2016 tour and also has Ed playing harpsichord. The second and third will come out over Spring.

A triptych of solo performances on bowed classical and electric guitar. Released on Creative Sources Recordings on October 21st, 2019 and available for pre-order on Bandcamp.

All the material is improvised and no effects are used.

Normally, I would think that releases by Creative Sources Recordings contain improvised music and as such the release by Ed Williams is no different. I quickly inspected it, to see if I would do the review or pass it on and I kept listening. Williams plays ‘bowed classical and electric guitar on the three pieces here. I had not heard of him before. He is also a harpsichordist and composer and hails from Marseille, France. He is a member of Heard Of Bears, TANDEM and Grand 8 Ensemble. The three pieces on his solo CD were recorded live, two in Marseille in 2017 and one in New York in 2018. The latter uses the classical guitar and the two French pieces the electric guitar. What attracted me to these pieces was the minimalist, repeating phrases he played. In ‘Spectrum NY’, it started with a bow on the strings, quite forceful, followed by what was very gentle fingerpicking but once it derails, it is time for some more attack on the strings. In the two electric guitar pieces the sound is more metallic and in the first part also ‘rockier’; it borders on the edge of distortion, with the bow placed in such a way that it creates overtones with fine, mild distortion. I was reminded of some older Jim O’rourke live recordings that I heard (and saw back in the day) and that is what, perhaps, attracted me to the music of Ed Williams. It has that delicate, fine line between something silent and introspective and something loud and dirty, within the space of a single piece, but with both ends tied to the world of minimalism, with slow but definite small changes in the music and the result is some most powerful music. This is something for those who aren’t necessarily the biggest lovers of improvised music. (FdW)
––– Address: https://www.creativesourcesrec.com/

From Marseilles, Ed Williams arrives with his album Solos (CREATIVE SOURCES RECORDINGS CS 618 CD) on which he performs on bowed guitars. This fellow also plays the harpsichord, is an improviser and composer, and member of the ensembles Heard Of Bears (whose gimmick is to invite a new musician to play with them every night), TANDEM, and the Grand 8 Ensemble – a 20-piece band of strings, brass, vocalists, guitarists, and more. I see he’s received higher education training in music and studied electroacoustic composition at Cité de la Musique. He turns in two sets on the electric guitar, both making very effective use of lower register notes which cause quite a rumble in the ribcage. If it’s textural scrape and abstract groanings you’re seeking, along with suggested clouds of harmonics floating like soap bubbles, you might prefer the second part of ‘Aux Soirs Du Chercheur De Noise, Marseilles’, as it leads the listener into a profound contemplation of the mysteries of the night sky, while also leaving space for quieter reflections and reveries. On the other hand, the first part has a slightly more abrasive tone and proceeds to a vaguely chaotic, disconnected ending, which is enjoyable. In between these two electrified honkers, we have ‘Spectrum, NY’, which was performed on a classical guitar (hence, presumably, acoustic) and our French hero continues to apply his scraping bow with nuanced, subtle passes of the hand and arm. Oddly enough I find this one the most accomplished of the set. Among the alien sounds and noises, more conventional ripple-picking is also permitted in the schema, and parts of this glorious 18:37 improvisation almost rival the sound of a classical orchestra playing “spectral” music by Grisey or such. He also veers towards the unusual guitar soundworld once staked out by Hans Reichel on his landmark FMP records, particularly with the odd tunings. At this point we would remind you it’s all Williams playing solo and that he uses no effects pedals, generating all these fine drones, notes, textures and harmonics by means of old-fashioned craft and technical skill. Excellent. (Ed Pinsent) 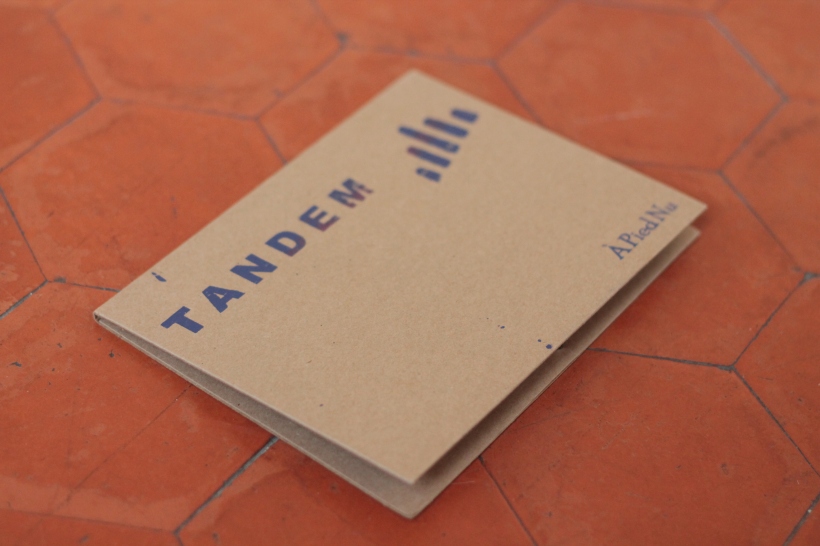 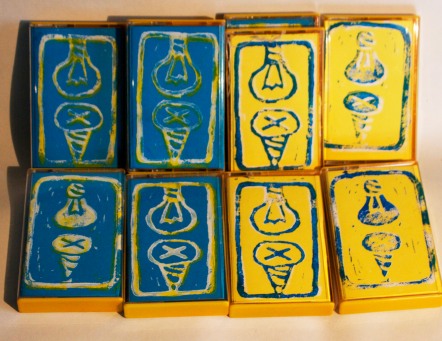 Each unique cassette cover was lovingly cut up by hand and linoleum block-printed by the artists using illustration templates by visual artist Marta Anatra. Some are blue, some are yellow, and all went through an old typewriter as well.

There are 50 copies in the whole world. Both tracks are solos for guitars prepared with bows and various objects.

Side A (Bleu) – Ed Williams
Side B (Jaune) – Fabrizio Bozzi Fenu

Compilation of recordings from the Heard Of Bears Invite… concert series at Asile 404, Marseille. Limited edition release comes with a visual taken from the posters for the concert series + download code. Come get a copy at our next gig or email me!

Recorded in Lancaster Baptist Church, Mark Hanslip’s debut on Tombed Visions is new and revisionist strand of bewitching chamber jazz that bristles with a unique kind of supernatural tension. Assembling Stephen Grew on Piano, Alexander Cutteridge on Laptop and Digital processing and on 4 of the 6 cuts, Ed Williams on Guitar, ‘Church’ ethereal ambience is maximised by its recording location, the clarity of each musicians playing fluttering with almost perceptible liturgical reverb. It is why this record work so well. You can distinctly hear each of the players voices, even when flares into its wildest moments. Stephen Grew’s spritely piano work drills into the silence. Ed Williams guitar is almost unrecognisable, using it more akin to a prepared piano, the strings ruminating sharply in the dark. Mark Hanslip’s gorgeous Tenor Sax playing, so rich with soul and melody, warm in its breathy, oaken tones even at its most peculiar. You can hear every breath and lick of the reed in his ghostly, hushed avant-bop style. Cutterdige’s addition to this music is the most unique counterpoint, peppering the sound with electronic snare hits, rumbling bass pads and founds sounds of riverbeds and creaks. Where so many contemporary improvised music records feel cold and academic, ‘Church’ is always resolutely melodic, even at its darkest. These automatic songs twinkle and glisten like mineral crystals in the deep of a strange and wonderful cavern.